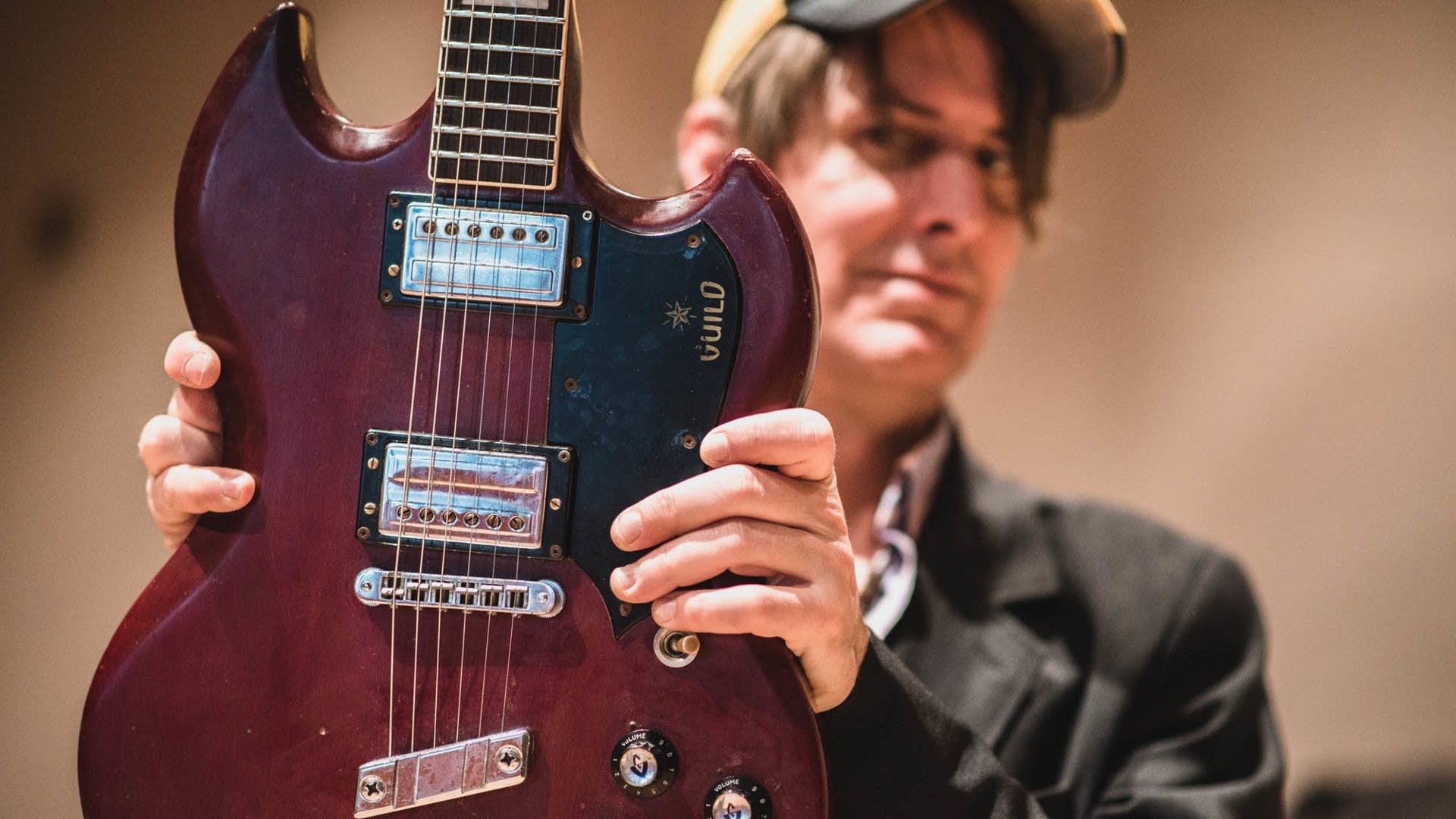 Former Pavement frontman, Stephen Malkmus, hits The Albert Hall with The Jicks in October. He’s widely regarded as one of the most influential American songwriters out there. Thomas Featherstone takes a look at his career through five of his favourite songs.

While the Silver Jews were often (unfairly) pegged as a Pavement side project their early aesthetic tended to share more in common with the minimalism of 90’s slowcore band, Bedhead and the country-tinged miserablism of alt-rock band, Idaho.
As for those songs that Malkmus co-wrote with Berman though… well, the Pavement singer’s influence on lyrics and instrumentation on these tracks is undeniable (‘Tide to the Oceans’, co-written by Berman and Malkmus on the group’s first album, ‘Starlite Walker‘ is essential listening for fans of that sound).
During recording sessions for the second album, Berman stormed out, and the session time was used for Pavement EP ‘Pacific Trim’ instead. They reunited though for flawless third album ‘American Water’. Standout track ‘Blue Arrangements’ sees Malkmus’ dulcet tones yearning for a ‘shimmering socialite’ amidst a backdrop of an abusive domestic life. Backed by Berman straining his twenty-a-day drawl in harmony, the song initially presents itself as a slacker love song that actually seems much darker on subsequent listens.

Malkmus still plays this song with the Jicks so maybe it’ll find its way onto the Albert Hall set list somehow (please).

Possibly one of the most beloved Pavement songs, and certainly one of their best known for it’s third verse that vents Malkmus’ disdain for his fellow Lollapalooza ’94 tourmates, The Smashing Pumpkins and Stone Temple Pilots: The ‘foxy’ attitudes of the bands and their pretensions are lost on a jaded and disinterested Malkmus  who “could really give a fuck”. Malkmus would go on to say these lyrics had been misinterpreted after the song’s release but the damage was done and The Smashing Pumpkins threatened to cancel their Lollapalooza performances unless Pavement were kicked off the tour.

Too bad, too, that the fuss around this verse tends to overshadow the two that precede it, taking us from an aftershow backstage party and over the turnstiles onto the streets with only a skateboard, a Walkman, and Malkmus attempting to reconcile his desire to settle down with the reality of his life on the road. The song itself is Malkmus at his best, combining country-style, plucked guitars with whoops, whistles, and pianos that results in something lacking that typical, angular aspect that Pavement were well known for, but no less idiosyncratic and free spirited. Speaking of free spirits, Pavement guitarist, Scott Kannberg (AKA Spiral Stairs) would say this was the band’s “Hotel California” on the re-release’s liner notes. Perhaps an oblique reference to it either being written whilst on the road, or, as this writer interprets it: their defining track.

Hey, you gotta pay your dues
Before you pay the rent

The Nigel Godrich-produced, ‘Terror Twilight’ (1999), was borne of some strenuous recording sessions with the esteemed Radiohead producer and is typically regarded now as the swan song for the band. Malkmus would call it “overproduced” in later years, and while the production value of the record wasn’t bad in and of itself, it just didn’t lend itself to the songwriting methods of a band that revelled in extended, jammy wig-outs and song structures that were allowed to wilfully collapse at their climax. And so, band relations were strained, Pavement broke up, and Malkmus went solo, or rather, he formed the Jicks (though they are not named as such on this record).

The resulting record is playful and upbeat, swapping the wistful, anti-romanticism of Major Leagues and Spit on a Stranger from his previous record for thematic allusions to imperialism and fragile masculinity (‘Pink India’), and references to ancient Greek mythology (‘Trojan Curfew’). The album’s lead single starts from the point of view of The King and I actor Yul Branner and ends up musing on Bob Dylan lyrics (Jo Jo’s Jacket). So, lyrically speaking – yeah, it’s pretty out there, and a great indication of the character-based songs that Malkmus would pen on later records.

Godrich’s work on the last Pavement record seemed to have left an imprint on Malkmus, much to the delight of Terror Twilight’s fanbase, particularly on this song, Church in White, a heart-wrenching ode to a lost friend featuring some of Malkmus’ most personal lyrics to date, set against expansive, ethereal keys and culminating in a duel guitar solo that really makes you feel like there’s no more to this record than just Malkmus hard at work on his own  – that it’s a Jicks record through and through. Will they play this live at Albert Hall? Seems unlikely, sadly. But the Albert Hall did use to be a church so…well, it’s a stretch but a guy can dream.

I would be remiss not to mention the album artwork that frames Malkmus in a scene eerily-reminiscent of the Balearic, cafe del mar, house music compilations from that era. You can’t un-see the mental image of ’00s Malkmus on the decks at an Ibiza beach cafe, clad in white linen and playing the kind of music your mum throws on for her ‘chill-out time’. I feel it just lends further weight to my feeling that this is his most bonkers record by far and certainly one of the most interesting.

The 2000’s saw three more releases from the Jicks and in 2010 Pavement reunited for a world tour. The casual melodicism of Tigers and Share the Red, the cheeky Senators, and the garage-rock of Tune Grief suggested Malkmus revisiting his previous group’s works had reinvigorated the songwriter’s passion for the slacker, lo-fi rock that made him famous in the first place.

It’s a diverse record that’s greatest success over the previous ’00s Jicks records is that it never loses focus, allowing the band to explore wilder song structures without getting bogged down in extended jammy guitar duels that dominate the playtime. The down-tempo tracks dotted throughout the album like Long Hard Book and Fall Away lend a galloping pace to the record and show the band at their tightest and most expressive, while Beck, who worked with Nigel Godrich in 1998 on Mutations, takes a more relaxed approach, giving the structures room to breath and tightening the production just enough to allow the messier sections to shine.

Malkmus is, as ever, one of the smartest lyricists in indie, enough so that even his silliest or most ambiguous phrases are as memorable as any others. Stick Figures in Love is a glorious summer track with one of the best standalone Malkmus riffs ever committed to a Jicks record and a vocal hook during the bridge that’s short lived but brilliantly produced, providing a heady dose of the same energy that made Crooked Rain, Crooked Rain such an essential summer record. Perhaps most dizzying aspect of the song is the pervasive air of paranoia and lyrical allusions to religious proselytizing that steer the feel of the song from something breezy and uplifting to an ominous portent of foreboding doom.

Sparkle Hard feels quite different from any Jicks release thus far. The lyrical content of the record is intrinsically bound up with the political and cultural climate in which it’s been released with references to facebook and microaggressions, and a withering appraisal of recent events in America capturing a sense of political apathy, framing the act of voting as a hollow civic duty, and the (hashtag)metoo movement. ‘Men are scum, I won’t deny…’ Malkmus sings on Middle America, before inviting the listener to “Come get it when it’s hot… it fits in your grip, such a feminine trip. Revel in the rubber pavilion.” playing with the pronunciation and alliteration of the words in the lyric. It feels urgent, vital, but ultimately still a lot of fun.

Surely a key talking point of the record is Kim Gordon’s verse on Refute. A desert highway romp complete with fiddles and steel string guitars sees Malkmus’s opening verse about a man turning “logic on its head” for the sake of love.

Young men with lofty ideals and ideas about love are hardly a novel feature in pop music, but Malkmus’ verse gives way to Gordon’s character: a housewife bored with her middle class marriage seduces her au pair, employing some biting allusions to Gordon’s relationship with former Sonic Youth bandmate, and ex-husband, Thurston Moore. The dichotomy of naive hope and cynical fatalism on this track culminate with the lyric “Marry on, Children. But be aware, the world doesn’t want you anymore.”