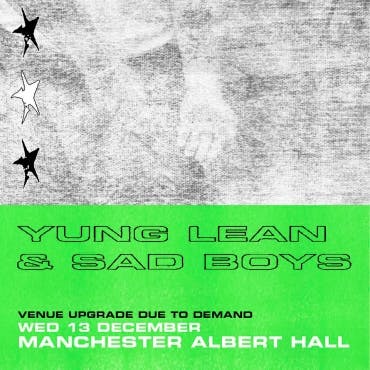 The tale of Yung Lean is as unassuming as it is wildly exploratory, a contradictory narrative about a misfit stranger from Stockholm who became a worldwide phenomenon – a protracted and at times grievous metamorphosis from pubertal, post-internet novelty to D.I.Y icon with an extensive, organic influence over anything and everything from off-beat art projects and mainstream culture alike.

Since getting attention with ‘Ginseng Strip 2002’ he’s set off on a seemingly genreless and open-minded dispatch into the past, present, and future of pop culture, an alternate reality where early internet aesthetics, late ’90s southern rap, ad a punk mindset all fuse together.

Still only 21 years of age, Yung Lean has achieved a lot – independently releasing eclectic album ‘Warlord’, embarking on a sold out world tour, featuring on Frank Ocean’s ‘Blonde’ – and still shows signs there’s plenty to come. He’ll be writing the next chapter of the story by releasing his 5th studio album later this year.