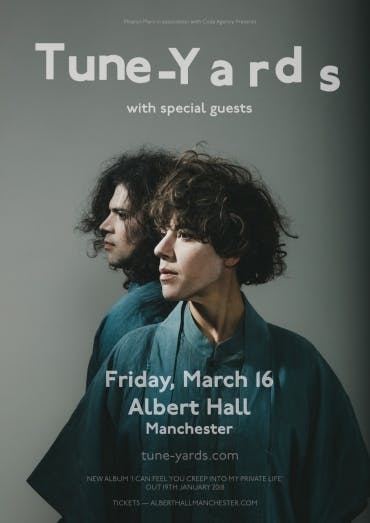 Merril Garbus, the creative spark behind the Tune-Yards moniker has delighted us over many years with her colourful afro-beat influenced alt-pop since 2009 and the release of her distinctive debut album ‘Bird-Brains’. The record was painstakingly made with a dictaphone and some free mixing software.

Since the debut her sound has simply grown and intensified as she’s got her hands on more studio equipment and constantly surpassed limitations. Her last three records have both gained Pitchfork’s esteemed ‘Best New Music tag, and her live shows, have received 5 star reviews from The Guardian, The Independent and many other publications because of their reliance on visceral looping of instruments to build intense layers in a heart-in-mouth way.

We’ve watched this live show develop from a one woman ukelele and loop pedal combo at Deaf Institute in 2011 to a five-piece full band extravaganza at Gorilla in 2014, and now with new song, ‘Look At Your Hands’ whetting out appetites we can’t wait to see what she’s got up her sleeve for The Albert Hall in 2018!