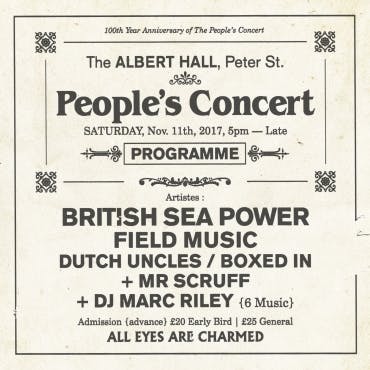 100 Years ago The Albert Hall was a very different venue. In 1917 the space hosted a ‘People’s Concert’ and after recently discovering a programme from the original event we’ve decided to celebrate its anniversary in style with a modern celebration for the people of Manchester.

Headlining back in 1917 was ‘The Famous Range Concert Company’, and guests were treated to a troupe of classical singers, plus a ‘humourous entertainer’. This time we’re doing it in style with indie-rock geniuses British Sea Power topping a bill which also includes the incredible Field Music, Manchester’s iconic Dutch Uncles, Trof favourites Boxed In, and BBC 6 Music tastemaker Marc Riley. There’s also a twist in the mix as one of Manchester’s home-grown DJs is yet to be announced too.

The grandeur of Albert Hall has mesmerised both visitors and performers for decades with modern day musical maestros such as Beck, Manic Street Preachers and Primal Scream gracing its hallowed stage, yet the discovery of this aging but perfectly preserved programme from ages gone by, gives a rare glimpse into the building’s illustrious musical past. It came to light when the hall was reopened in 2013 for the first time in 40 years as part of the Manchester International Festival and local resident Stefan Bielecki made a dedicated trip to the venue, with the sole purpose of passing on this piece of Mancunian history to the owners.

A lot may have changed in Manchester since the first ‘People’s Concert’ but what will never change is the city’s love of music, and as one of the few historic venues still standing we’re proud to be able to celebrate our heritage, so come join the party…