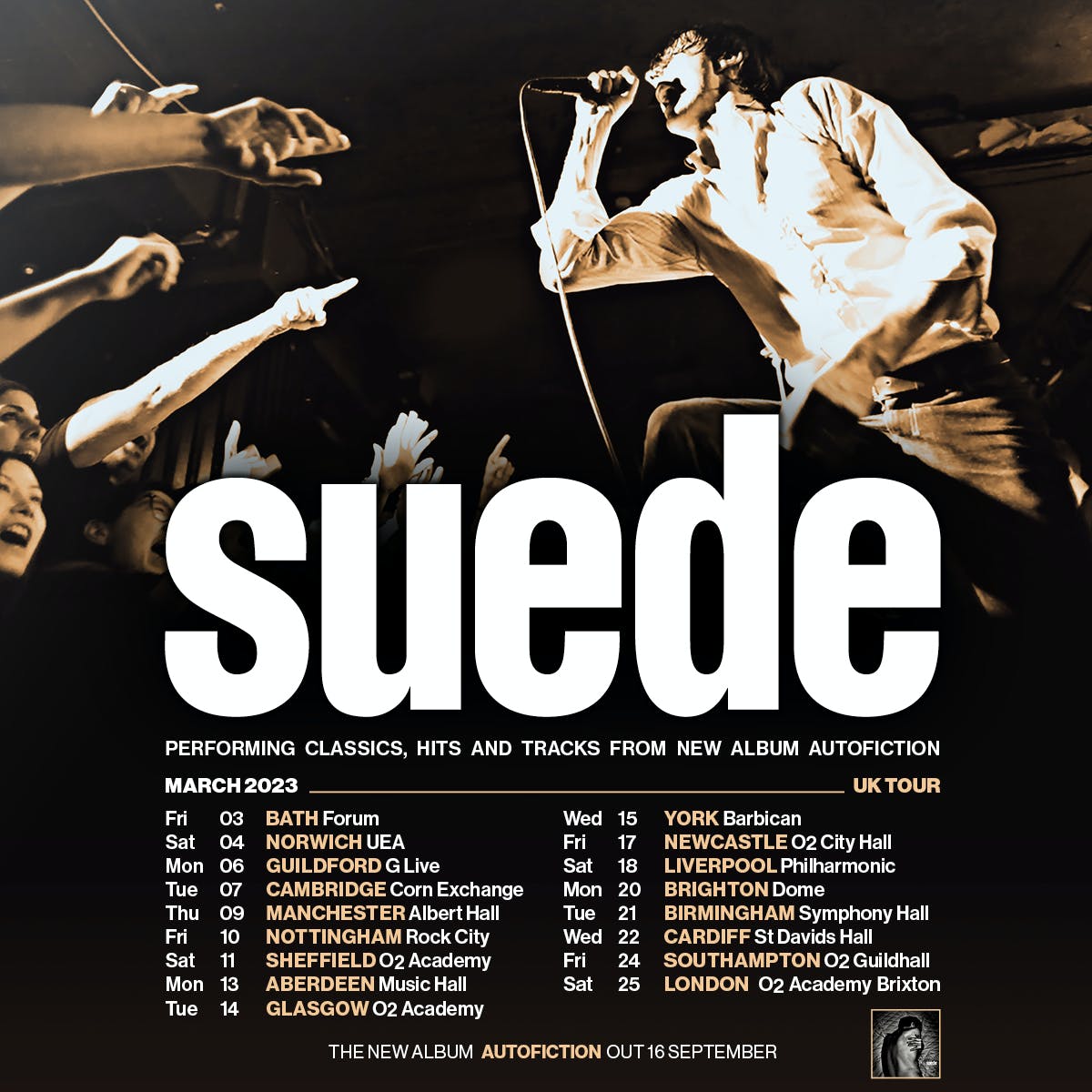 The news of Suede’s upcoming live shows and latest album (Autofiction) follows a pair of secret shows they performed under the guise of Crushed Kid – an idea that saw Suede taking the ‘back to basics’ nature of Autofiction to the extreme by playing live under a fake name. After sparking rumours following a week of mysterious online activity, including releasing new music under the moniker, Crushed Kid made their debut performance at London’s 300 capacity MOTH Club, followed by a set at Manchester’s Deaf Institute. Fans were treated to a high-energy surprise preview of Suede’s ninth studio album in its entirety. No encore, no greatest hits. The set saw The Telegraph champion Suede “a band reborn” whilst the Evening Standard confirmed, “like all the best new bands, Crushed Kid left us wanting more”, The Guardian praised “a euphoric return”, and CLASH heralded the set an “unrelenting display of where Suede stand in 2022”.

“Autofiction is our punk record,” Brett Anderson says. “No whistles and bells. Just the five of us in a room with all the glitches and fuck-ups revealed; the band themselves exposed in all their primal mess.”

Their aim was to create an album capturing the power and energy that exists between Suede and their audience at gigs. A theme that’s resonated since the day they announced the album, debuting bold opener ‘She Still Leads Me On’ live on stage at a surprise performance in Brussels that was live streamed for fans.

Autofiction also includes ‘That Boy On The Stage’ and ‘15 Again’. Mainstays on the BBC 6 Music and Radio 2 playlists, the tracks have seen Autofiction tipped as “a superb new album” by The Times and “their best album in decades” by Uncut. DIY Magazine described Suede “fiercely in motion” and MOJO praised Autofiction “so moving, the punk ferocity protecting a deeply vulnerable core”.

Suede recently released a companion piece to the new album with their first short film production, Autofiction: A Short Film. Directed by Katie Lambert (MrMr Films) and created in collaboration with Suede, the production was described as “essential and immediate” by AnOther Magazine, and explores the complexities of memory, the perceived truth, communication and anxiety in human relationships. Themes at the core of Suede’s new album, which, as its title suggests, is one of Brett Anderson’s most personal records yet.

“Autofiction has a natural freshness, it’s where we want to be,” Anderson says. And where Suede want to be is, in a way, the same place as they were when they began 30 years ago – a group of people living off the raw sensation of creating music together in a room.

In a move that recalled their most formative years, the writing process saw Suede becoming like a new band again – lugging their own gear to a Kings Cross rehearsal space, collecting a key, setting up, and starting to play. Later recording live at Konk studios in North London, Suede teamed with long-time collaborator Ed Buller. Ed first worked with the band producing their debut single ‘The Drowners’, which sees its 30th anniversary this year.

Ahead of their March 2023 headline tour, Suede will perform Autofiction at a series of very special shows through September and October 2022. A rare chance to see the band live in some of the UK and Europe’s most intimate venues – including two nights at London’s Electric Ballroom which sold out in twenty seconds. Suede will also perform at a series of in-store concerts and signing appearances at UK record shops in September.