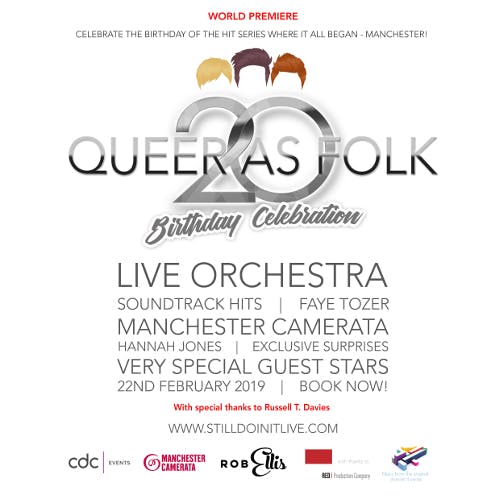 A message from Anne and Paul Darcy, Carl Darcy’s Mum and Dad:

“It is with a very heavy heart that following the death of our much loved son, Carl Darcy at the weekend that we have made the heart-wrenching decision to cancel the Queer as Folk 20, Still Doin it Live show that was scheduled to take place on Friday, 22nd February at Manchester Albert Hall.

“Carl was a super fan of the iconic show who sadly passed away, suddenly, on Saturday, aged just 37.

“The show was Carl’s dream and passion and he worked tirelessly to pull together an event that we know would have been hugely successful.

“While it’s incredibly raw for all of us, we had hoped that the show would still go ahead as we couldn’t think of a better way to honour him than to continue on with the show, and make it a commemoration of Carl’s life.  It would have been wonderful for as many of his friends and fans of the show to join us but despite his family, his closest friends and the show production team working tirelessly all week, there are just too many hurdles so close to the event to make this possible.

“This certainly hasn’t been an easy decision and we wanted to personally thank everyone involved for working tirelessly so the show could go on, but sadly, with not having access to important details and accounts, it is just not feasible within the confines of the timeframe we have faced.

“We would like to thank Rob Ellis, creative producer and writer of the show, Tim Crooks, orchestrator of the music. Composer, Murray Gold and Russell T Davies, writer of the original show who came together to support Carl and who have been invaluable in helping him to realise his vision.  Our thoughts and gratitude to every member of the Manchester Camerata orchestra who have been rehearsing so hard and to each and every singer in the wonderful Sunday Boys Choir. Not least, our deepest thanks to the artists involved in the production including Faye Tozer and ex star of Queer as Folk, Craig Kelly, who had generously decided to waive their fee or have it donated to a charity of the family’s choosing in Carl’s honour.

“The outpouring of love, compassion and support we have received during this difficult time has been overwhelming and it is clear to see just how loved Carl was by so, so many.  For that, we are truly grateful and want to say a heartfelt thanks a million to each and every one of you.

“Queer as Folk 20, Still Doin it Live was a one night only show this Friday and for those who had booked tickets, please contact your ticket provider for details on their refund policy.  We want to thank you all for your support of the show and offer our sincere apologies. We know it would have been Carl’s dying wish to have the show go live, but as a family we will be looking at other ways we can still commemorate a life, cut far too short but a life well lived and that was full of love and laughter with friends and family.”