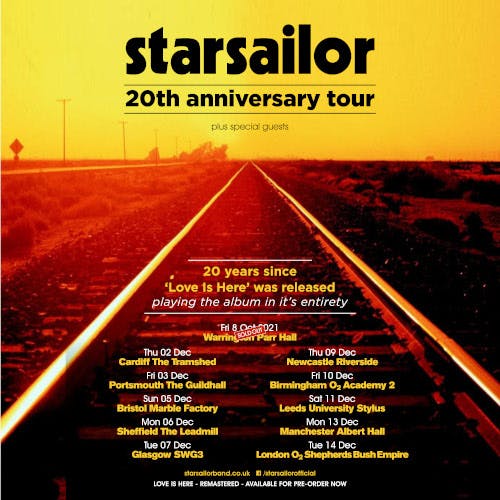 PLEASE NOTE THAT THIS SHOW IS NOW TAKING PLACE AT THE O2 RITZ, MANCHESTER

Starsailor regrets to announce that this show and remaining dates of the tour are postponed with immediate effect due to members of the band testing positive for covidThe remaining shows will be rescheduled and announced shortly with all tickets valid. The promoters of the said shows will be in touch in due course with further details The band and management would like to sincerely apologies for any inconvenience caused, but the health and well being of the band crew, and everyone surrounding is obviously of the utmost importance. Thanks again to everyone who came to the shows, your support means the world to us. We would also like to take this opportunity to wish you an amazing Christmas and a prosperous start to the new year Starsailor x

Following the instant sell-out success of their hometown show in Warrington, Starsailor are back with a full 20th Anniversary tour of their debut album ‘Love Is Here’, which they will perform in full at Albert Hall!

Starsailor burst onto the scene in February 2001 when their single ‘Fever’ earned them the title of ‘Britain’s Best New Band’. Their second single, ‘Good Souls’, reached the Top 20, and ‘Alcoholic’ earned the band their first Top 10 hit. Their debut album followed not long after and reached the No 2. spot in the UK charts to great acclaim. Second album ‘Silence Is Easy’ featured production from John Leckie (Stone Roses, Radiohead), Danton Supple (Elbow, Doves), and Phil Spector (John Lennon, George Harrison). The album reached No 2. in the charts and had three of the band’s biggest hits, the title track ‘Silence Is Easy’, ‘Born Again’, and ‘Four To The Floor’. The group relocated to Los Angeles to record their third album, ‘On the Outside and All The Plans, which both received favorable reviews. They’ve also enjoyed more than their fair share of prestigious gigs, supporting the likes of The Rolling Stones, The Police, The Killers, and U2.