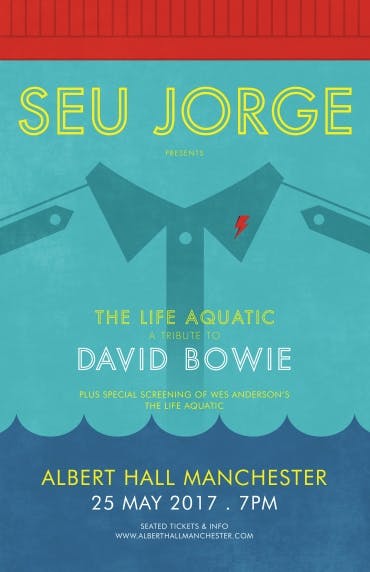 We would advise customers to allow extra time for travel and additional security checks at the venue. Please consult the venue website and social media for additional updates as they become available.

Seu Jorge, one of Brazil’s most talented contemporary singers, rose to international fame in the Wes Anderson film A Life Aquatic. In his acclaimed role as Pelé dos Santos, a singing sailor, Seu Jorge performed several of David Bowie’s songs in the film. But in a twist, he did it in Portuguese, accompanying himself simply on acoustic guitar. Seu Jorge’s adaptations in Portuguese of David Bowie’s music underscore the breadth and depth of his compositions and have gone on to have a significant cultural impact.

In commemoration of David Bowie’s recent passing, Seu Jorge performs a special tribute to him while recreating the feel to the film A Life Aquatic on stage.

“Had Seu Jorge not recorded my songs in Portuguese, I would never have heard this new level of beauty which he has imbued them with.” — David Bowie