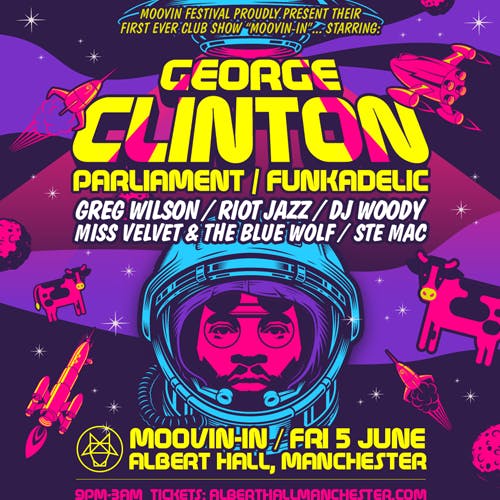 THIS SHOW WILL NOW BE TAKING PLACE ON FRIDAY 28TH MAY 2021. ALL TICKETS REMAIN VALID AND MORE ARE ON SALE NOW! NEW EVENT PAGE HERE

The acclaimed Moovin Festival crew have an udderly funkadelic party lined-up on Friday June 5th. Legendary funk and soul superstar George Clinton will headline Moovin In at Manchester’s Albert Hall as part of his last ever farewell tour, with disco, house and hip hop talents Greg Wilson, Riot Jazz, Dj Woody, Miss Velvet and the Blue Wolf and Set Mac all lining up.

It’s fitting that Clinton plays for Moovin on this tour as the crew have tried to book him in the past for the main festival which takes place each August Bank Holiday Weekend on Whitebottom Farm Etherow Country Park – but it never quite happened so they have created this night specially for this unmissable occasion.

This will be so much more than a regular gig – Moovin will bring all the same cultured and creative production know how, quirky design and eye for detail that makes their annual festival such a cult favourite. The mystical and escapist vibes you experience there will be transported to Albert Hall in the form of wild decor, spectacular performers, magic and surprises that are all lovingly crafted and utterly bespoke for this historic occasion.

This tour marks the end of a 50 plus year career funkin’ around the world. Despite being awarded the lifetime achievement Grammy, George is still hard at it having sold millions of records and played thousands of gigs. The cosmic funk explorer revolutionised R&B during the ’70s, twisting soul music into funk by adding influences from several late-’60s acid heroes: Jimi Hendrix, Frank Zappa, and Sly Stone. Alongside icons such as James Brown and Sly Stone, George Clinton is synonymous with defining a genre, creating a music movement which is as important now as its inception in the 1970s.

Don’t miss out on your chance to see the greatest funk practitioner there ever was on UK shores for the last ever time.