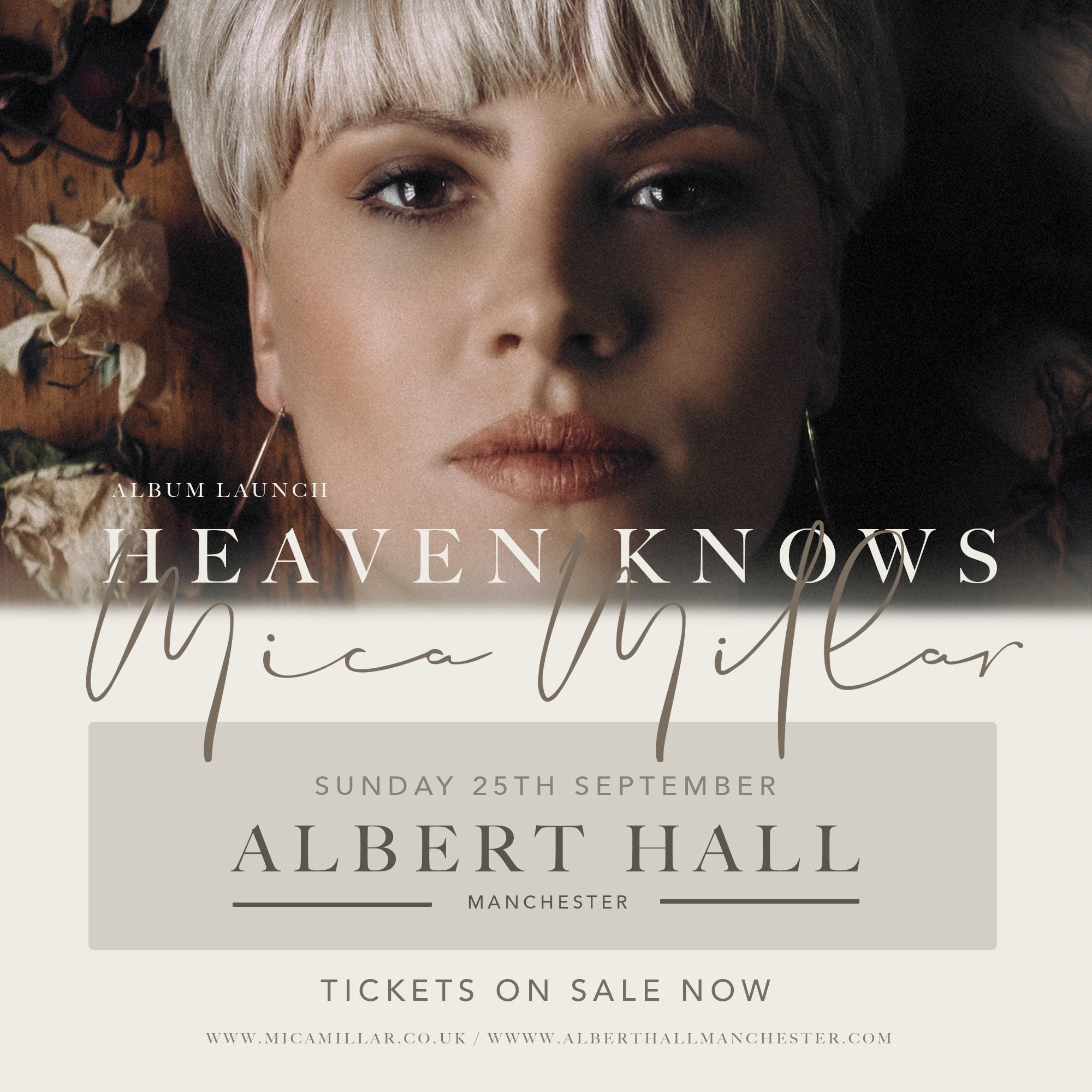 Join Mica Millar for her hometown album launch, performing her brand new debut album ‘Heaven Knows in full, with her eight-piece live band – a show not to be missed by fans across the Northwest.

Self-written and produced, Heaven Knows explores a variety of themes drawing inspiration from a plethora of vintage soundscapes – most notably soul, blues, gospel and jazz. Respectful nods are paid to girl groups of the 60s and 70s and classic Motown, giving her songs a timeless quality that is both reassuringly familiar yet distinctively Mica Millar.

Since the independent release of ‘Heaven Knows’ on Mica’s own label ‘Golden Hour Music’, the Manchester Soul songstress has been capturing the hearts and minds of fans and critics alike. As well as being featured on the front cover of the iconic Blues & Soul Magazine last month who credited her as “a star with intense emotional sincerity”, the album has also picked up glowing acclaim, receiving 5 stars from Echoes Magazine for ‘soul album of the month’ and an inclusion in their ‘Best Soul Albums of 2022’ list in addition to a wave of praise from national press, including Daily Express who cited ‘Heaven Knows’ as “a classy debut” and Daily Mirror outlining the vocals as ‘amazing’ and songs as “timeless and euphoric,”, Mica is firmly establishing herself as a well-respected, esteemed songwriter who is set to continue pushing her artistry and spreading her messages of love, hope and empowerment through music.

Amassing over half a million streams within a month of its release, widespread support for ‘Heaven Knows’ also includes national radio support from the likes of Trevor Nelson at BBC Radio 2, a slot on Clive Anderson’s ‘Loose Ends’ on BBC Radio 4, lead single ‘Preacher Man’ championed by Craig Charles & Tom Robinson on 6 Music, support for title track ‘Heaven Knows’ on BBC Radio 1 with Victoria Jane and Flashlights on BBC Radio 2’s Good Morning Sunday as well as a TV appearance on ITV’s Granada Reports and a host of regional interviews and live sessions on BBC London, Manchester, Scotland and many more.

Jazz FM also became one of Mica’s biggest supporters, making ‘Heaven Knows’ their ‘Album of The Week’ alongside a filmed live session and ongoing playlist support with ‘Flashlights’ shooting straight onto the A List.

Mica’s distinct vision is one that’s earned her renowned credibility within the industry and it’s her creativity, drive and attention to detail that has made ‘Heaven Knows’ the album it is – a timeless collection of modern soul showcasing a confident new artist, quickly establishing herself as a new and unique voice in British Soul music.

“A star with intense emotional sincerity is born. ‘Heaven Knows’ is an outstanding debut album that’s awash with skilful balladry”.

“You’ll see the care and attention that’s gone into this. It’s definitely been worth the effort. This is top work for any artist, let alone one making their first solo set… As impressive a debut set as we’ve heard in a long, long time”.

“Her voice is amazing and her originals feel timeless and euphoric. No wonder she’s recently made the cover of Blues & Soul Magazine. “Better days come,” sings Mica on the title track. They’re certainly coming for her.”

“If you really care about proper contemporary Soul Music, you need to investigate. Little wonder that more than a few Soul Tastemakers are already talking about Mica Millar’s Heaven Knows as Brits Soul Album of The Year”

“Receiving universal praise and understandably so, Heaven Knows is our Soul Album of The Week”

“Heaven Knows is definitely on track to be a groundbreaking album, one that I suspect will reach high up on many retrospective ‘Best of 2022’ lists towards the end of this year”