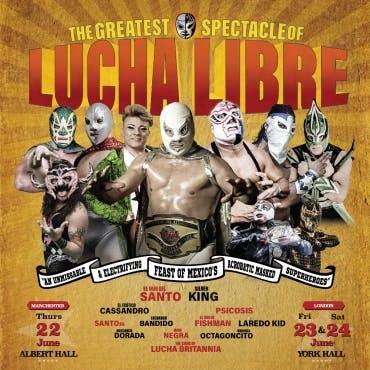 THE GREATEST SPECTACLE OF LUCHA LIBRE!!!

This summer, Mexico’s iconic masked superheroes are coming to The Albert Hall on 22nd June for an electrifying extravaganza. Featuring some of the sport’s most exciting names and colourful characters, spectators will experience the acrobatic, mythical, and often dangerous world of Mexican masked wrestling. Tickets are on sale now…

The venue will be transformed into Mexican arenas, transporting audiences to a timeless era where legends and new Lucha stars battle in epic live confrontations of Good vs. Evil. Dressed in flamboyant capes and outlandish suits, the wrestlers perform complex acrobatic moves, rapid sequence holds, and spectacular high-flying maneuvers, using the ring’s ropes to catapult themselves towards their opponents.

Presenting a stellar line-up of Mexican and British names, ‘The Greatest Spectacle Of Lucha Libre’ will feature some of the biggest stars of Lucha Libre. Mexico is currently celebrating 100 years since the birth of one of its greatest Luchadores, El Santo. El Santo was Mexico’s first and biggest Lucha Libre star in the ring and has appeared in films, comic books and is now part of Mexico’s popular culture. This year, the UK welcome’s back his son and one of Mexico’s successful luchadores, El Hijo del Santo to the ring, and his Grandson and the new heir to the iconic mask, Santo Jr.

Other Luchadores entering the ring include Nacho Libre star Silver King, the Liberace of Lucha Libre Cassandro, the high-flying luchador Laredo Kid, WWE mini wrestler Mascarita Dorada and the original Octagoncito. This year also sees a new generation of stars taking part including Bandido Luchador and the heir of another legendary wrestler, El Hijo de Fishman, alongside some of the stars of the UK’s own Lucha Britannia including Cassius The Neon Explosion and female wresters Muñeca de Trapo and Diablesa Rosa.

Now famous the world over, Lucha Libre is a Mexican style of professional wrestling and one of the country’s biggest sports, drawing thousands of people every week to many wrestling arenas across the country. Translated as “free fighting”, Lucha Libre wrestlers are divided into Rudos, who use underhanded tactics and break the rules, and Técnicos, who play by the rule book and use more complex and spectacular moves, each Luchadore has his own distinct character. More than just regular wrestlers, Luchas are regarded as iconic legends and the superheroes of Mexico. Loud, exciting and exhilarating, ‘The Greatest Spectacle Of Lucha Libre’ will bring this one-of-a-kind experience to a UK audience.

An exhilarating night of entertainment for all ages, The Greatest Spectacle of Lucha Libre will also feature authentic Mexican food and delicious cocktails.