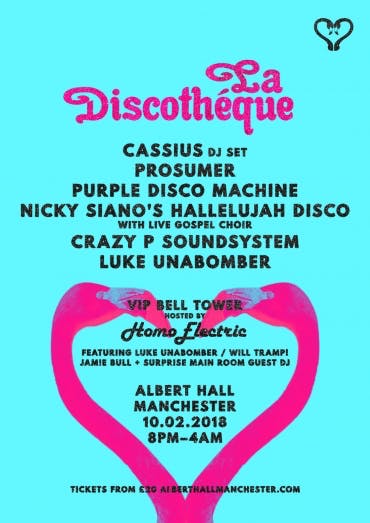 La Discothèque storms into 2018 and lands with a bang on the 10th of February and we aren’t holding back. Expect the usual feelgood vibes and music to make you wave your hands in the air like you just don’t care, encompassing disco and house and everything in between.

Nicky Siano’s Hallelujah Disco
Studio 54 stalwart Nicky brings to Manchester the debut of his Hallelujah Disco complete with live gospel choir! He’ll be churning out the classics as they sing along, belting it out for this high energy club performance. Siano is no stranger to the genre with almost 40 years in the business, a record collection to make your eyes water and a CV that includes co-owning ‘The Gallery’ in NYC and mentoring Larry Levan and Frankie Knuckles.

Prosumer
For most fans of electronic music, Prosumer is a name that needs little introduction. Having held down a residency at the world-famous Panorama Bar for a number of years, the German-born and now Edinburgh-based DJ is a true veteran of his craft. Most importantly however, he’s a self-professed disco lover and we can’t wait for him to share the gems of his collection with us!

Purple Disco Machine
International DJ, producer and remixer Tino Piontek aka Purple Disco Machine has been on a whirlwind of a musical journey since the 2009 conception of his highly successful disco house music project. As well as boasting an impressive back-catalogue of solo and collaborative productions, PDM has also offered up remixes for numerous A-list musicians, including: Jamiroquai, Faithless, Shapeshifters, Hercules & Love Affair, Gorillaz & many more.

Cassius
The originators of French House. Credited with inspiring such artists as Madonna, Roger Sanchez and St Germain, Philippe Zdar & Hubert Boombass (aka. Cassius) were the forerunners for French electronic music in the 90s, a period that eventually led to the likes of Justice and Daft Punk achieving international stardom. Their discography includes remixes for legends such as Björk and Depeche Mode to name but a couple. Legends.

Crazy P
The band’s ‘Soundsystem’ set sees Danielle performing all their biggest hits live, whilst Ron Basejam mixes live. Not a full band show but don’t let that fool you, the pair have enough energy to get all 2000 of you dancing from the off! Crazy P are no strangers to La Discotheque and we can safely say they’re up there with our favourite acts ever!

HomoElectric
At long last we welcome Manchester’s very own party starters HomoElectric. Credited for breathing new life into Manchester’s LGBT club scene, be sure to get down early as residents Jamie Bull, Luke Unabomber and Will Tramp! bring a slice of the 0161 to this already star-studded and incredibly international lineup! The boys are in the VIP bell tower with a secret set from the main lineup, while one half of The Unabombers drops in to warm up the Hall.