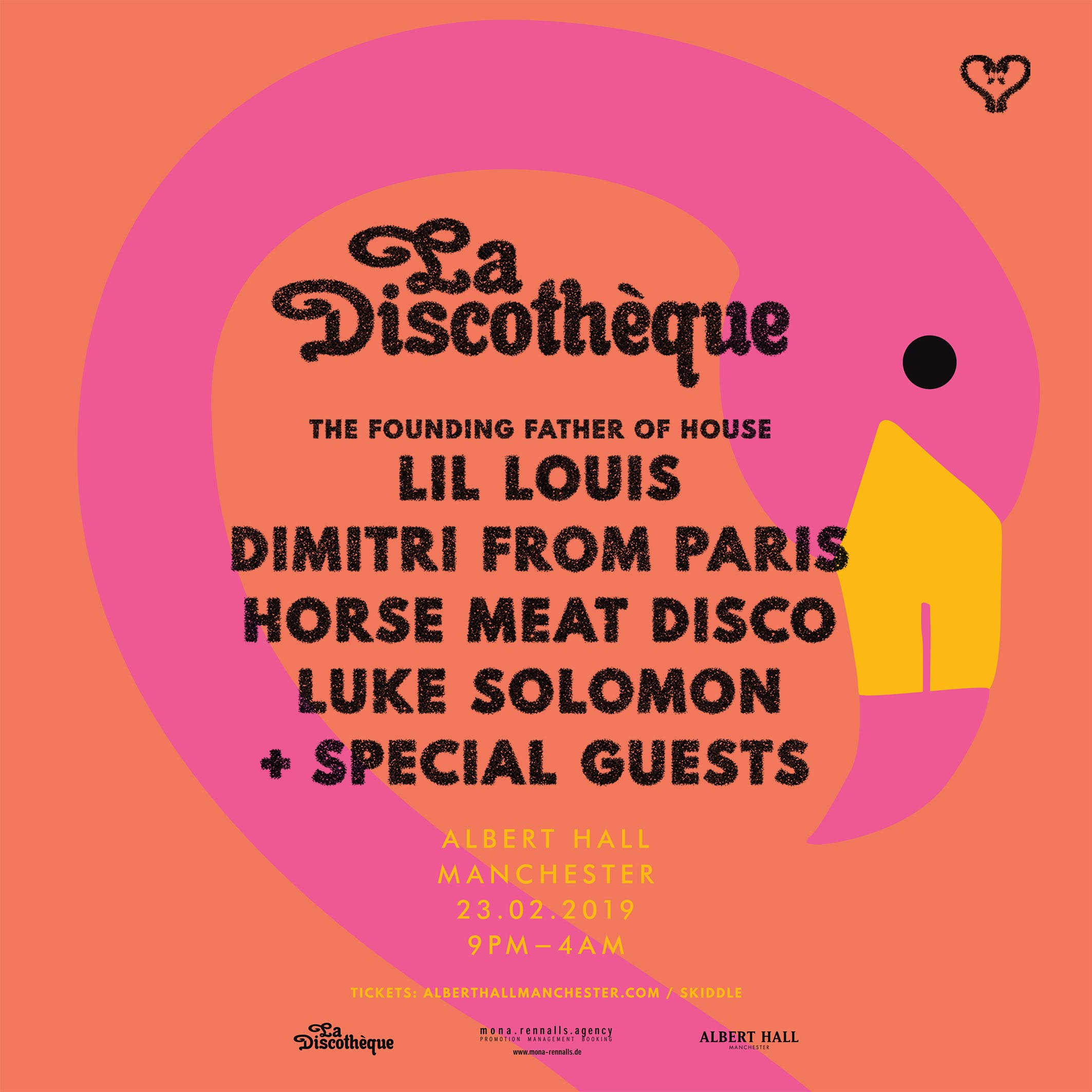 Straight off the back of a 2nd Birthday tour across Manchester, Leeds, Newcastle and Obonjan, and a recently announced date at London’s Printworks, La Discothèque returns for 2019. Expect all the usual disco debauchery, as well as our fabulous flamingos, quintessential queens and soul sergeants on Saturday 23rd February. Save that date!

And now, without further adieu, it’s the lineup you’ve all been waiting for…

From one US House legend to the next… Headlining our first foray into 2019 is none other than Lil’ Louis, the Chicago-born DJ / Producer widely referred to as the “The Founding Father of House”. For good reason too; his seminal piece of work – “French Kiss” – released on Pete Tong’s FFRR imprint in 1989, spent 2 weeks at #1 in the dance charts and remains one of the most recognisable tracks in House music today. Amazingly, this will be his first performance in the city in seven years! Don’t miss the genuinely rare opportunity to see a true House music legend strut his stuff in Manchester!

Hot on the heels of Lil’ Louis is another legend of similar standing, The King of Disco, Dimitri From Paris! Boasting such a prolific discography, the Frenchman is one of our all-time favourite artists, a true champion of the Disco era without whom La Discothèque wouldn’t even exist! We were fortunate enough to have him play at one our first ever shows and we’ve been trying to get him back ever since! Don’t miss the return of The King!

Our favourite partners in crime are back! The Horse Meat Disco crew have gone from strength to strength since they last played for us in Manchester, flying the flag all over Britain and selling out countless parties across numerous cities. It’s the queer party for everyone: “Homos and heteros, bears, fashionistas, naturists, guerrilla drag queens and ladies who munch”. Now mainstays on the club and festival circuits as DJs, and with tours in Asia and beyond becoming a formality, the Horse Meat revolution is well and truly underway. Get ready for a Disco stampede!

Making his La Discothèque debut this February is Luke Solomon, a true linchpin of the underground House music scene. Luke founded the long-running imprint “Classic” together with Derrick Carter back in 1995, produced Horse Meat Disco’s latest album and has been running the A&R for Defected for nearly a decade now. Despite operating on the fringes of the underground for so long, Luke has made big strides in recent years, touring extensively and bagging “Soldier Of The Scene” at last year’s DJ Mag “Best of British” awards. Having collaborated with so many of our upcoming and previous guests it was a no brainer to get him on this lineup!