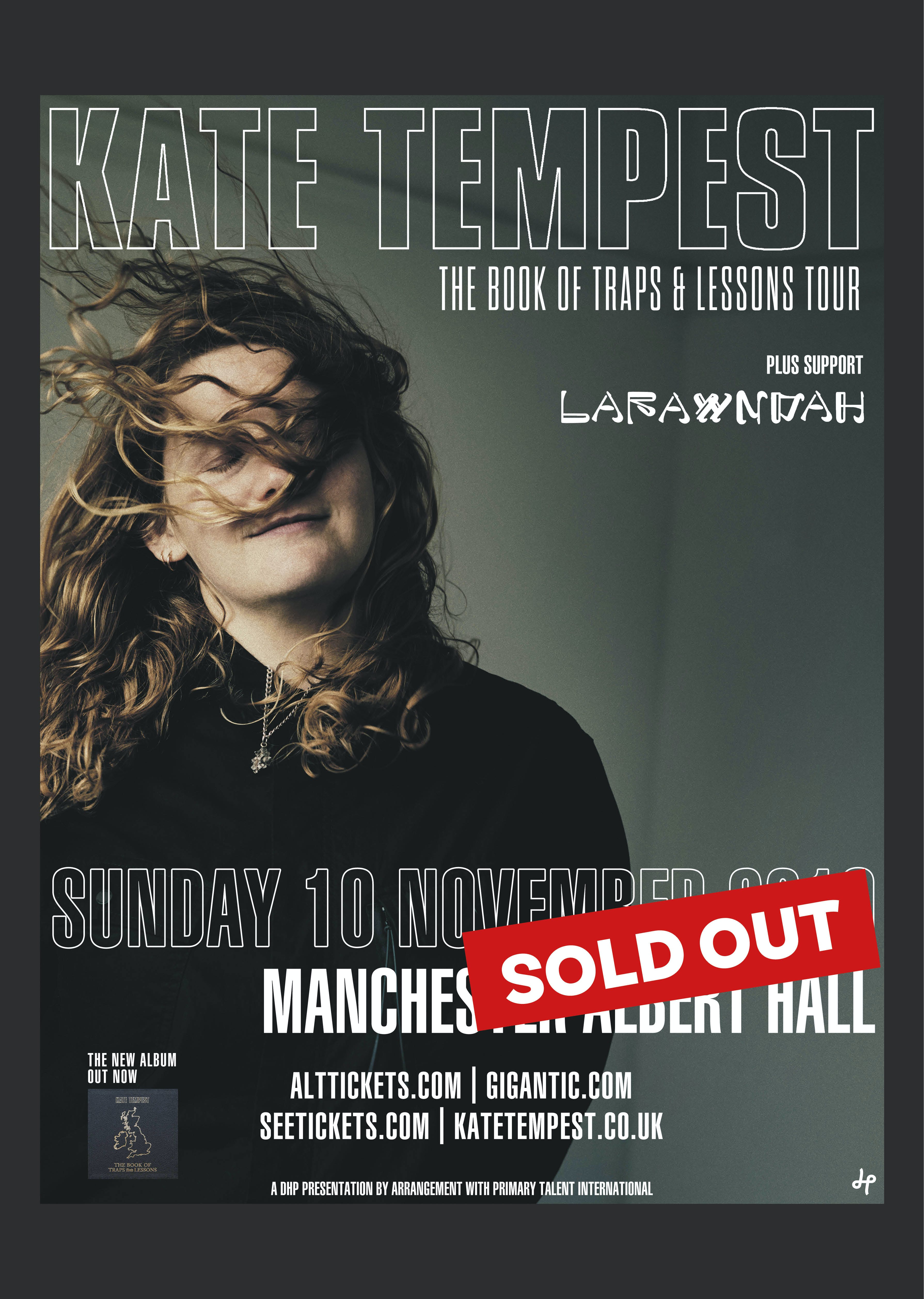 By the time Kate Tempest begins The Book of Traps and Lessons, the song has already moved on. I came to, she says, meaning homegirl was out of it, lost for a bit, hung up and hung over and by the time she wakes up, catches up, comes back to life, life has moved on. Certainly, the person she thought was right there has moved on, and even in a moment of brief capture, where she falls into a most tender trap, she is out of reach. Together they drift apart. Tempest is surrounded by friends, but something is missing. They are not really friends, but people who remind us of adulting’s first big mistake: confusing friendship with companions in misery. Or companions in drunkenness. All that’s left is her battle born voice and a sad piano, both of which vanish before the song even ends, an unholy cutting off, as if the song was instantly severed from whatever was giving it voice. It’s a stunning change for such a fire-breathing poet. A disturbing quiet space for somebody usually at the forefront of bold sound. Not that she’s quenched her fire or anything, but that now Tempest sounds as if rising up from depths instead of blazing across sky.

I say battle born voice because up to now Tempest has been in essence a battle rapper. Ready and armed for a fight, except her battles were never with other rappers or for establishing some sort of dominance of flow (though she can flow for days). Her battle was against shit at once more existential and more real, shitstems really, whether that be the repetitive dullness of todays with unpromised tomorrows, or the newly rising menace of old racism. Beats, Rhymes and Life told in a bracing, bold, way. Tempest hasn’t spat a single bar that didn’t come with scars. That combination has always made her the realest because—no lie— the first question anybody has when they come across the idea of Kate Tempest is, is she for real? Tempest mastered true meaning in the best way—by not trying too hard to mean something, always the kiss of death for a poet. Or a rapper.

One more stop before we jump off this rap train. No question that Tempest could drop rhymes on a beat, and her voice was always formidable, but in the past her albums were packed head to toe with them, fine for then, but totally out of place now that she’s moving into unprecedented new space. Space that sometimes calls for voice and not much else. Enter Rick Rubin, the last name one would expect to hear given the crucial role he played in making big beats ten times bigger. But Rubin’s not quite secret is that he is a vocalist’s producer, meaning he came out of rap after all, and rap is first about the voice not the beat. But his genius is taking all that shit away, stripping Johnny Cash to just guitar and voice, and in Tempest’s case, stripping the music down sometimes to nothing but dots and loops. Tempest never needed much help pushing her voice to the center, but it begins in the center here, music coming in slight brush strokes, and only when she needs it.

The results are striking. As I said, we never had to struggle to hear her voice, but it is something to hear only her voice. Here it serves to put away all the rap allusions because this is her first album where she often does not rhyme. Tracks pass by for long stretches without beats, and with it the rigidity that can come from such beats, including the need to rhyme. But that’s neither here nor there. In fact, for a poet, talking about rhyming can be lazy. Especially with so much going on in content and form. Tempest can soar and stay grounded at the same time, more often in successive lyrics. Love is a self-made thing, she declares at one point, like it’s a philosophy or even a fact, but this love stuff involves real people not just clever words, and once it becomes a breathing, tumultuous thing her resolve gets way shakier. Because actual longing plays out in raw and real talk, about things seen and felt, not just universal truths. The same voice that recognizes longing as an ideal beloved by poets, also realizes that longing fucking sucks; and I still check my phone seventeen times a minute, to see if you called and I missed it. Love is a self-made thing. After all much of it is what we make it, and much of what we think is love is nothing more than a projection of fears and desires that we respond to. But when the same song warps the line into love is a self-made trap, and when the word trap starts to replace love in the lyrics, that hits like truth too.

Because not even a self-made thing is a sure thing, and more than anything Kate Tempest is our poet of uncertainty. Three albums in, the questions have only gotten harder to answer. Which is funny, because answers pepper the whole album. They’re just not always answers to the questions asked. So, they pop off like non sequiturs, like pieces of wisdom that refuse to hang around until they hit you. The racist is drunk on the internet, the racist is drunk at the dinner table. Answers that have dismayingly difficult questions, so they come across as statements instead.

But having no answer is taking the easy way out. Nobody wants to be the person telling people what to do. And yet somebody has to say something. Offer something. Try something. And maybe revolution starts in the home first, with whatever we consider home, and whomever we consider family. When all there is, is knowing that you feel/ What you are feeling/ Hold your own. The line sounds like two things at the same time. Hold your own, meaning hold who you belong to and who belongs to you, but also hold on to yourself, stand firm, because this is going to hurt like hell.

The trouble with battle born is that you get battle weary. I hope that I live, she says at one point, but I’m not sure this is life. That plus the sparse music (and ok, all of “All Humans Too Late”) might give the feeling that all is lost. And yet the album radiates hope. It’s funny how many poems labeled incendiary never generate actual warmth. But The Book of Traps and Lessons, with its beat-less minor keys pushes forth Tempest’s stubborn faith in humanity with crystal clarity. A new relationship is still a moment of breathless glee and wonder; listening to her hips and pushing kisses to her lips. A lesson not learned still leaves us the opportunity to learn again. Our planet is out of time, but the fire will cleanse and restore us.

Maya Angelou told us to tell the truth. So, it’s time for a late-night confession. I kind of ripped off Kate Tempest. I was at the end of an old novel but not yet the beginning of a new, and while I had text, I had no voice. I had no way into narrative; locked out of my own story. Not writing much but reading quite a bit, I eventually grabbed Tempest’s debut novel, The Bricks That Built the Houses, which I had been meaning to read. Five paragraphs in, there it was. The type of passage that doesn’t just leap off the page, but leaps into your throat and demands to be shouted all the way out. A paragraph that was internal and external, like having the wildest ten thoughts you’ve ever had all at once. It was a passage in awe of, yet impatient with words, like emotion was running too hot and fast for words to catch up. Like life.

The paragraph I wrote in response was not the beginning of the story, but it was the beginning of my understanding that I had a novel. But that’s not the first time Kate Tempest has given another artist life. Speaking of life, a poet once said her need to speak was greater than her need to breathe. Kate Tempest has been telling us something close to this for a while now, but now that she has pulled back on nearly everything but her voice, she tells us again:

To speak and to breathe is to do the same thing.