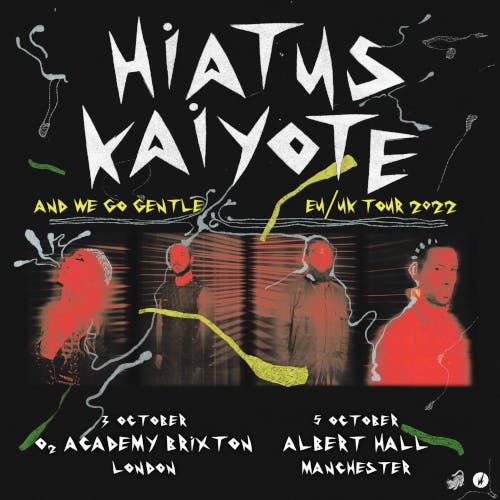 Comprised of Naomi “Nai Palm” Saalfield (guitar, vocals), Paul Bender (bass), Simon Mavin (keys), and Perrin Moss (drums), Hiatus Kaiyote broke internationally in 2012 with their first LP, Tawk Tomahawk, which was praised by simpatico musical travelers from Erykah Badu to Questlove to Prince, and embraced by DJs like the BBC’s Gilles Peterson, DJ Jazzy Jeff and Anthony Valadez (KCRW/Morning Becomes Eclectic). Their first R&B Grammy nomination, for their song “Nakamarra,” was followed by a second for “Breathing Underwater,” from their sophomore album, 2015’s Choose Your Weapon. Still, their music defied categorization: Some called it “neo-soul,” others “future soul”; the band calls it, simply, wondercore. Their music found fans in hip-hop, sampled on songs by The Carters (Beyonce & Jay-Z), Kendrick Lamar, Anderson Paak, Chance The Rapper, and Drake—with whom Nai Palm collaborated on his Scorpion album; and in jazz, when Robert Glasper invited the band to appear on his album of Miles Davis remakes, Everything’s Beautiful. Their records and live shows won them raves in The Guardian, Rolling Stone, and in the New York Times, where Jon Pareles wrote that “Hiatus Kaiyote’s music stretches and bends every parameter.”

By October 2018, recording for Mood Valiant was already well underway, and backing tracks were largely in place, ready for Nai’s vocals. Then, during a brief swing through the U.S., Hiatus’s frontwoman was diagnosed with breast cancer. Her mother’s death from the same disease was never far from her mind: “I became so acutely aware of my mortality.” Nai rushed back to Australia and into the hospital, where she underwent a life-saving mastectomy. Bender was there when Nai was wheeled to her room after surgery. “She came back in like a champion,” he says. “I’ve never seen anyone go through something like that and be so triumphant, vibrant, present, grateful. She was alive. It reframes what things you should put your energy into: Let’s just all be alive.”

As Nai recovered, the band turned back to their work with altered perspectives. Her lyrics, even those written before her illness, took on a prescient quality. Then a trip to Rio de Janiero in late-2019 to work with legendary Brazilian arranger Arthur Verocai shifted the vibe of the entire album. “We had recorded the song ‘Get Sun,’ and it already sounded good,” says Bender. “We had no idea what he had written for it.” When Verocai fired up his horn and string sections, it was a release for everyone. “Tears were running down my face,” Bender recalls.

“Verocai is such a lovely man,” Perrin says. “The engineer never stopped smiling, the set-up was beautiful, so after Arthur finished, we asked if we could use the studio for the rest of the evening.” The all-night session brought two new songs onto the album. Nai and Simon tracked an epic ballad, “Stone or Lavender,” while Bender and Perrin banged out a bass and drum groove that that band then turned into the song “Red Room” in an act of spontaneous composition.

The result is an album, bookended by Verocai’s strings, that relaxes into a groove: sunlit, beguiling, masterful. Behind everything is Hiatus’ familiar sense of musical adventure, their knack for making the complex sound simple: Simon’s experiment with an odd rhythm in groups of 5 becomes a cascading jam called “Rose Water.” Bender and Simon’s trading of single notes, back and forth, to make a melody becomes “All The Words We Don’t Say.” Nai’s cheeky take on sex-obsessed, three-minute pop hits becomes “Chivalry Is Not Dead,” a song about the bizarre mating rituals of leopard slugs (they turn fluorescent) and seahorses (they lock tails and dance).