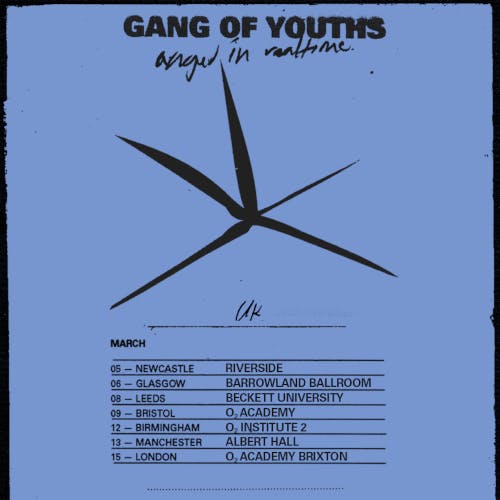 TICKETS ON SALE AT 9 AM ON FRIDAY 19TH OF NOVEMBER

Gang of Youths are set to undertake their biggest tour of the UK in 2022, to launch their upcoming album ‘angel in realtime’ which is out on February 25th through Warner Records.

The quintet say, “the album is about the life and legacy of Dave’s father, indigenous identity, death, grief and God. And also the Angel, Islington.”

Despite and indeed because of frontman Dave Le’aupepe’s father’s absence, his influence permeates every talking point that the album offers. At times it’s solely focused upon the precise, personal experiences of loss: the dichotomy of intensity and peace that comes as someone passes through their final days; the overwhelming feeling in the wake of their death that life will never be the same, even if the rest of the world at large remains utterly unchanged.

Following their recent singles, ‘the angel of 8th ave.’ , telling of falling in love in a new city and making a home in another, and ‘the man himself’, a song created around a sample recording from the island of Mangaia in the Cook Islands that is about living without the guiding hand of your own father, today they release ‘tend the garden’.