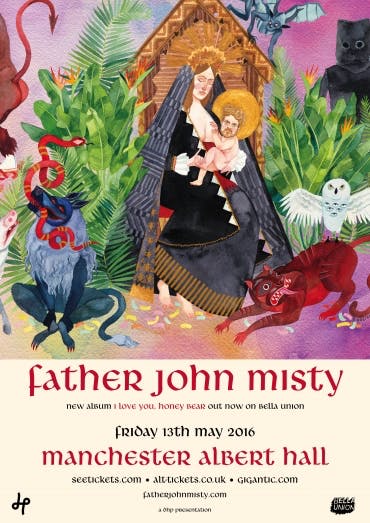 After an amazing sold out show at Gorilla on his last UK tour, things have gathered pace quickly for Father John Misty! He’ll now be playing our biggest venue!!

His recent record ‘I Love You Honeybear’ was a huge success, and saw him sell out Gorilla in February this year, now it’s taking him to The Albert Hall for a show to remember!

Here’s what FJM has to say about the record:

“The songs are a narration of my experience falling in love, which means different things to different people, but which I found incredibly inspiring, personally and creatively.  My personal mandate for the writing herein was to claim the experience for myself without resorting to a multitude of clichés.  I believe I have addressed the sensuality of fear, the terrifying force of love, the unutterable pleasures of true intimacy, and the destruction of emotional and intellectual prisons with an imprint that is undeniably my own”, explains Josh Tillman, the man behind the moniker.