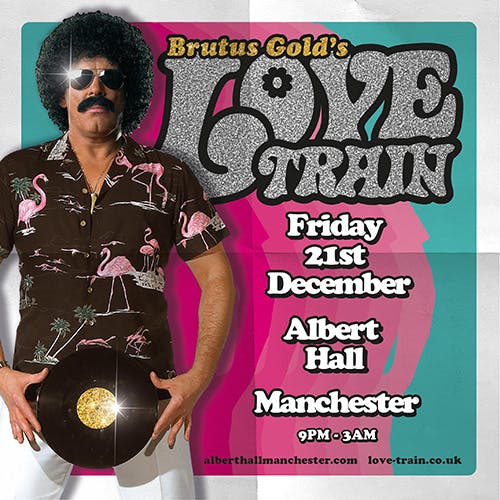 Self-identifying as Puerto Rican’s Love God, Brutus Gold has spent the past 30 years laying down with the best 70s music and breaking disco hearts at all the renowned festivals and mega parties across the globe. This special Manchester appearance promises to be a no holds barred immersive party complete with an all-star cast of crazy and shady characters, flamboyant dancers, disco divas and the best music from the grooviest Decade.

Joining the Disco King will be the fabulously outrageous Chad Valley, Disco Dick, Tony Martini, Willis Hardy Freeman, Kay Tel, Angel De Lyte, Chase Goodman, Camp David, Ron Co, Carlito and Patric Duvet to make it a night to remember with their interactive extravaganza which has the power to make the hardest audience don a wig and do the hustle. He’s even seduced clubbing heroes Jamie Bull (Homoelectric) and DJ Paulette into flexing their disco muscles as party support.

Get raiding the charity shops and pull together your most outrageous 70s costume and step inside aboard the Brutus Gold Love Train, it’s gonna be one helluva smooth ride. Peep Peep!