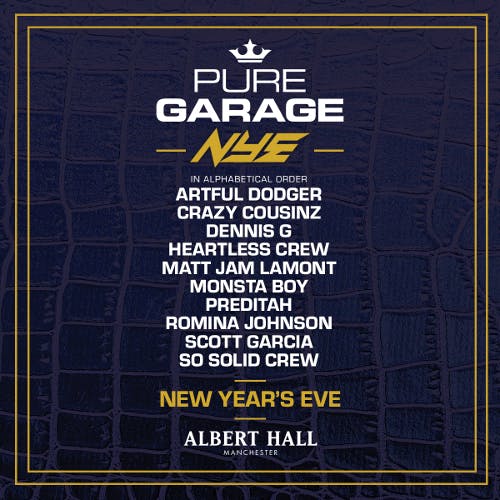 Packed with a glittering ensemble of the finest names in garage history, the New Year’s Eve event will ring in the bells of 2020 to the soundtrack of a flurry of the finest legends to ever grace the genre, including performances from garage pioneers Artful Dodger, and hugely popular collective, Heartless Crew.

With further performances on the night from legendary ‘21 Seconds’ gang So Solid Crew, and multi-instrumentalist Preditah (whose Jorja Smith collab ‘On My Mind’ has racked up almost 80 million Spotify streams), Pure Garage NYE will also see Crazy Cousinz and Matt Jam Lamont in attendance for what promises to prove one of the biggest parties of 2019.

Rounding off the year in style, Romina Johnson – best known for her huge anthem ‘Movin’ Too Fast’ – will perform live, with performances at the Manchester venue also coming from ‘It’s a London Thing’ producer Scott Garcia, Monsta Boy and Dennis G, whose seminal hit ‘Sambuca’ is sure to bring the roof down on the raucous celebration.

Having recently earned a nomination in the category of ‘Best Large Club Promoter’ at the 18th anniversary of the Skiddle Awards, JBM Music continue to rise meteorically, throwing the biggest events for the party people of Manchester and beyond. Following two sold out shows last weekend, the company are set for a hectic Autumn/Winter schedule!

Bringing the finest names of the garage genre to the Albert Hall on New Year’s Eve, tickets for this undoubtedly sell-out event will fly fast, so be sure to snap yours up here (LINK) ahead of what promises to prove a truly unmissable way to bid farewell to 2019!