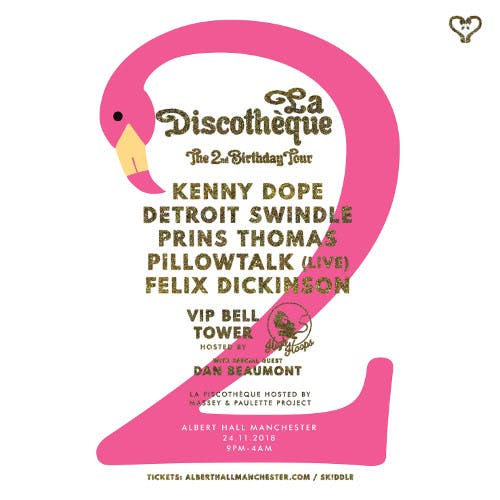 The UK’s most exciting Disco party La Discothèque turns 2 this year and we’re celebrating with a mini tour. You’ll find us taking over the beautiful island of Obonjan in Croatia from 22nd-27th August, Boiler Shop in Newcastle on 13th October, Albert Hall in Manchester on 24th November and Canal Mills in Leeds on 1st December.

Kenny “DOPE” Gonzalez is quite simply one of the most prolific producers of the modern electronic music era. Famed for his ability to fuse House music with more conventional genres such as Hip-Hop, Jazz, Latin, Reggae, Funk & Soul, Kenny has always been at the forefront of soulful House music, be it with Little Louie Vega under their Masters at Work moniker or on his own as a solo artist. Kenny has even produced remixes for the likes of Michael Jackson, Madonna, Daft Punk, Björk and many more! As a DJ, Kenny is said to have amassed a collection of over 50,000 records and continues to tour extensively, playing venues such as Studio 338 and Hï Ibiza. We couldn’t think of a better DJ to headline our 2nd Birthday celebrations!

Part of a golden generation of creatives in the late 1990s, Prins Thomas was one of the pioneering figures behind “Cosmic Disco”, a sound that shaped the Norwegian music scene for many years to come and also heavily influenced one of our previous guests, Todd Terje. Despite an extensive discography and real kudos as a producer (he was recently asked to do a remix for Franz Ferdinand), Thomas prefers to operate behind the scenes, rarely releasing his music on labels outside of his home country. As a DJ, Thomas trots the globe on a regular basis, having played the likes of Panorama Bar and Printworks on several occasions. He’s a DJ celebrated for his eclecticism, known to blend his trademark spacey disco sounds with stone cold classics such as Wham’s Club Tropicana!! It’s been nearly 3 years since he last played in the rainy city and we can’t wait to see how far he pushes the boundaries of Disco in the Albert Hall!

With over 30 years experience in the field, originally learning his trade at illegal raves up and down the country before hitting a real purple patch over the last few years, Felix Dickinson is a real DJ’s DJ. Regarded as one of the tightest mixers in the game, Felix holds high-profile residencies at both Love International / Garden Festival and Glastonbury’s Block 9, as well as regular appearances at established clubs / festivals such as Berghain, Fabric, DC10, Houghton Festival and Lente Kabinet. As a producer, he’s released on esteemed platforms such as Rush Hour and Futureboogie, as well as his own label Cynic. Of the current crop of breakthrough UK artists, Felix is one of the most original, and we’re super excited to see his talents up on the big stage!

Joining forces to form Detroit Swindle in 2011, Dutch duo Lars Dales and Maarten Smeets are credited with breathing new life into House music since the turn of the decade. Smash hits such as “The Break Up” and “The Wrap Around” on their own imprint Heist Recordings, cemented it as a go-to for warm, fuzzy House cuts, with the likes of Matthew Herbert, Pepé Bradock, Ge-Ology and Max Graef all going on to release on the label in years to come. With new residencies at established clubs such as London’s Phonox and Berlin’s Prince Charles, as well as the recent release of their sophomore album “High Life” in May, Detroit Swindle look to be a force on the circuit for many years to come.

Providing the live PA element, which has been a recurring theme here at La Discothèque, are San Franciscan trio Pillowtalk. With a series of high-profile releases on established labels such as Visionquest, Life & Death and Wolf + Lamb, Pillowtalk’s sound spans classic R&B, Boogie and Disco, as well as underground House & Techno. With close ties to Soul Clap and the Crew Love family, the group have toured around the world extensively, often improvising to collaborate on live jams with fellow Crew Love artists Tanner Ross and No Regular Play. We can’t wait to see what they bring to The Hall!

La Piscothèque is back! This time it’s local heroes Chris Massey and DJ Paulette teaming up for a very special b2b in the Albert Hall loos.​

Hosting the VIP Bell Tower and rounding off the lineup is local party starters High Hoops. The Hoops boys have been making serious waves over the last 12 months, supporting LGBT+ favourites Honey Dijon and Octo Octa, as well as featuring in Manchester’s most recent Boiler Room outing “Fleshback”. They’ve also invited good friend and Dance Tunnel / Dalston Superstore owner Dan Beaumont, who holds down a regular show on NTS Radio and recently wrote an engaging piece for Resident Advisor on the struggling creative scene in Hackney. One of the main room guests will also be performing a secret set but no clues just yet… As always, you’ll need a VIP ticket to access the Bell Tower, as well as the private bar, toilets and queue jump!